Organization Praises Web Portal as Complete Solution for Submitting Loan Modification Applications (WASHINGTON, DC) – HOPE LoanPort™ announced today that the National Community Reinvestment Coalition (NCRC), an association of more than 600 community-based organizations, is endorsing its web-based loan modification portal. Both the NCRC and many of its members are already using the groundbreaking new …

Washington, DC —  John Taylor, president & CEO of the National Community Reinvestment Coalition, issued this statement today in response to the Administration’s probe of mortgage servicers: “It was heartening to hear that the Obama Administration is investigating whether servicers are doing all they can to help homeowners avoid foreclosures, but their probe must include the abusive lending practices that led to the financial chaos that shattered our economy. The Administration should move quickly on the question of whether banks are doing what they must do and should do under housing laws to help borrowers because stemming foreclosures is key to ending the economic downturn. Foreclosures are the bane of our economic recovery, and we fail to see how a temporary national freeze will hurt the economy more than the foreclosures do. Nobody wants to freeze foreclosures on abandoned homes. And a foreclosure freeze gives us all the chance to counsel homeowners, work with lenders and servicers to fix the servicing pipeline, and keep responsible homeowners in their homes.

from The New York Times | By BINYAMIN APPELBAUM
WASINGTON — The swelling outcry over fast-and-loose foreclosures has thrust the Obama administration back into the uncomfortable position of sheltering the banking industry from the demands of an angry public.
Enlarge This Image 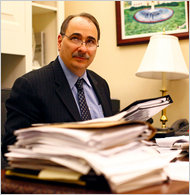 “There are, in fact, valid foreclosures that probably should go forward,” said David Axelrod, an adviser to the president.

While senior Congressional Democrats join the calls for a national moratorium on foreclosures, the White House once again is arguing against punishing the industry, just as it did in 2009 amid the outcry over the unbreakable habit of paying large bonuses.

“Irresponsible banks need to be held accountable, but if we have not found a problem with a bank’s process we do not believe that we should impose a moratorium where that can hurt the market and hurt individual buyers,” said Shaun Donovan, secretary of Housing and Urban Development. The administration’s basic logic has not changed since it took office in the depths of the financial crisis: Hitting the financial industry, officials argue in private and in public, hurts the broader economy. A moratorium on foreclosures may provide short-term political satisfaction in an overheated election climate, but the administration fears it will only delay the inevitable and necessary process of forcing many Americans out of homes they cannot afford.

Washington, DC – In a letter to President Obama on Friday, the National Community Reinvestment Coalition joined dozens of other consumer and civil rights groups in a call for a temporary national moratorium on foreclosures, until an investigation can be completed to determine the extent to which consumers’ rights have been violated by servicers and lenders. NCRC also called on Congress and the Administration to pursue non-voluntary measures to resolve the foreclosure crisis.

“The rights of consumers have been treated as an afterthought by the financial industry,” said John Taylor, president & CEO of the National Community Reinvestment Coalition. “Allowing the industry to rubber stamp foreclosures, and continue with sloppy, extralegal practices promotes a ‘moral hazard’ that encourages abusive behavior. Not intervening to investigate and ensure that consumers are adequately protected in the foreclosure process sends a message that mortgage lending and servicing continues to be the Wild West, wherein the industry is free to do what they want, without consideration for the borrower.”

“We need to end the voluntary reliance on the industry to do the right thing with respect to homeowners. Three years of following this approach on the foreclosure crisis has largely failed. Congress and the Administration should take this opportunity to finally put in place something that puts an end to unnecessary foreclosures, rather than delaying them,” said Taylor.

Washington, DC–On Friday, September 24th, NCRC will testify before Federal Reserve Board on making critical improvements to HMDA data, so that lenders can be held accountable for the types of loans they are issuing to communities.

“We are in an era of some of the most complicated mortgage products to-date and given the strain that bad mortgage loans have put on our economy, lenders should be examined with a microscope now more than ever. In the era of reckless and corrupt lending, it is crucial that HMDA actually does what it was enacted to do, which is identify discriminatory lending patterns and determine if financial institutions are meeting local housing needs,” said John Taylor, president and CEO of NCRC, in reaction to the Federal Reserve’s 2009 HMDA data report.

The recently enacted Dodd-Frank bill mandates significant improvements to HMDA data. NCRC calls upon the Federal Reserve Board and the new Consumer Financial Protection Bureau to expeditiously implement these improvements. In today’s release, the Federal Reserve Board states that the current HMDA data lacks information on credit scores, property values, and other factors necessary to fully account for disparities in racial access to affordable loans. First, we would like to congratulate you and thank you for your leadership in enacting financial regulatory reform that will go a long way towards leveling the playing field for consumers, increasing the safety and soundness of our financial system and helping to curb the worst abuses that caused the economic collapse. We want to thank you in particular for including enhancements to the Home Mortgage Disclosure Act and small business lending data in financial reform.

The report addresses the concerns surrounding foreclosure prevention rescue scams. The research study was conducted for a period of three months in mid-2009 using “fair lending matched pair testing” or mystery shopping” to assess the extent of the problem. Findings of the study demonstrate that an aggressive legislative solution and added public and private oversights …

Since the last review of the Home Ownership and Equity Protection Act (HOEPA) by the Federal Reserve Board, the home mortgage market has changed considerably. Subprime lending has become a dominant force, unregulated mortgage brokers now originate a large part of the mortgages, and exotic mortgages with exploding interest rates have become a common occurrence. …