Under the Community Reinvestment Act (CRA) regulations, CRA examiners evaluate a bank’s record of responding to credit and banking needs in local communities in which it has branches. These areas are referred to as assessment areas (AAs). Over the years, industry stakeholders have sought to engage in community development financing in geographical areas outside of AAs. The agencies have responded by allowing banks to do so provided they have first met needs in their AAs.

Community development (CD) loans and investments are for affordable housing, economic development, revitalization of neighborhoods and community facilities. CD financing is distinguished from retail lending to homeowners and small business owners in that CD financing involves large-scale projects that have a community-wide benefit such as refurbishing a recreation center.

In order for neighborhoods to revitalize successfully, CD financing must work in tandem with retail lending. For example, loans to first-time homeowners will create sustainable neighborhoods with minimal residential turnover only if the homeowners reside in pleasant neighborhoods that feature ample access to stores and community facilities. Likewise, CD financing of economic development and neighborhood revitalization will be durable only if residents can obtain home or small business loans.

In order to direct CD financing to areas of need, a thoughtful approach would ensure needs in AAs are addressed while also allowing banks to provide CD financing to underserved areas. The current CRA exam procedure allows banks to serve statewide or regional areas after satisfactorily serving needs in their AAs. NCRC, as described in more detail below, proposed numerical benchmarks as a means for increasing certainty in determining when a bank has met needs in its AAs. If a bank passed the numerical benchmarks, it could serve statewide and regional areas and also undeserved counties anywhere in the country.

In contrast, the Office of the Comptroller of the Currency (OCC) and Federal Deposit Insurance Corporation (FDIC) have offered a vague proposal for consideration of outside AA CD financing in their recent Notice of Proposed Rulemaking (NPRM).[1] It appears from the very few sentences in the NPRM describing this new approach, a bank could engage in an eligible CRA activity anywhere outside of its AA. Moreover, a large bank may need to pass its new CRA tests in only half of its AAs. Thus, under this proposal, it would be unlikely that examiners will carefully scrutinize retail lending and CD financing in AAs to ensure that they are effectively working in tandem. Moreover, it is unlikely that banks will target CD financing outside of AAs to areas most in need as measured by low levels of lending and high unemployment and/or poverty.

In comments responding to the OCC’s Advanced Notice of Proposed Rulemaking in 2018, NCRC suggested that the agencies retain current procedures for qualifying CD financing outside AAs but further facilitate it by implementing annual data collection and increasing the number of eligible areas, called underserved areas.[2]

The NCRC proposal, further developed in a white paper in 2019, would work in the following manner:[3]

The annual collection of CD data would consist of data on lending and investing that would correspond to the CRA regulation categories defined as financing for affordable housing for LMI people, economic development geared towards supporting the creation and growth of small businesses, community facilities and other activities that revitalize and stabilize neighborhoods.[4] NCRC proposed that this data would be collected on a census tract and county level. Precedents for this data collection include OCC databases on public welfare investments that are produced every quarter and can be downloaded.[5]

This procedure using CD data is more objective and certain than the current procedure, which appears to vary based on the subjective judgments of different CRA examiners. Also, it provides an opportunity for a bank not passing in the first year after its exam to improve during the second year and become eligible for outside AA CD activities.

In addition to retaining the allowance for outside AA financing in statewide and regional areas, NCRC suggested that the agencies also designate counties anywhere in the country that are considered underserved in terms of CD lending and investing. The agencies could develop measures to identify these counties such as the dollar amount of CD lending and investing on a per capita basis. Counties in the lowest quartile or quintile of CD financing per capita then could be candidates for designation as underserved.

To categorize counties as underserved, this analysis considered retail lending (home and small business lending). It did not consider CD financing since CD financing data was not available on a county level at the time the analysis was conducted. However, should the agencies implement county level CD data collection, it would be used in a manner similar to the retail lending described in this paper.

NCRC created a lending index by categorizing counties based on levels of lending activity. Specifically, NCRC calculated home loans per housing units and small business loans per operating businesses. The resulting values of mortgages and small business loans were then standardized at the county level utilizing z-scores. A simple average of z-scores combined the two measures in an index score for each county. NCRC then ranked counties by the combined lending index and sorted the counties into quintiles. NCRC used the most recent year for both the Home Mortgage Disclosure Act (HMDA) and CRA small business loan data, which was 2017 at the time of this analysis.

This diagram illustrates how we created the index:

The accompanying maps clearly reveal that the Quintile 1 counties are disproportionately in the South, the Midwest and Appalachia, which include areas of economic distress and pressing needs.

NCRC would recommend designating Quintile 1 counties as underserved for purposes of considering outside of AA CD financing. Overall, Quintile 1 counties are the most distinct compared to the other quintiles in terms of higher levels of economic distress and lower population levels. Moreover, since the overall objective is to identify underserved counties, it would seem that the best measure is one that captures lending levels and reveals which geographical areas have the lowest lending levels.

NCRC’s proposal for consideration of CD financing outside of AAs was further developed than the FDIC’s and OCC’s. The NPRM did not present any data analysis to estimate the impact of the agencies’ cursory proposal. In contrast, NCRC’s proposal and analysis revealed how its designation of underserved counties would indeed target underserved counties, economically distressed counties, counties with higher levels of African Americans and most likely southern counties that have higher levels of poverty and unemployment.

In addition, NCRC’s proposal offered clear numerical benchmarks and procedures for qualifying banks for outside of AA CD financing. This ensures that reinvestment has a good chance of succeeding in AAs as well as providing reasonable opportunities to engage in CD financing outside of AAs and in areas of most need. In sum, NCRC’s proposal would be more successful in achieving CRA’s goals for responding to pressing community needs than the agencies.’

Data sources for this white paper are the following: 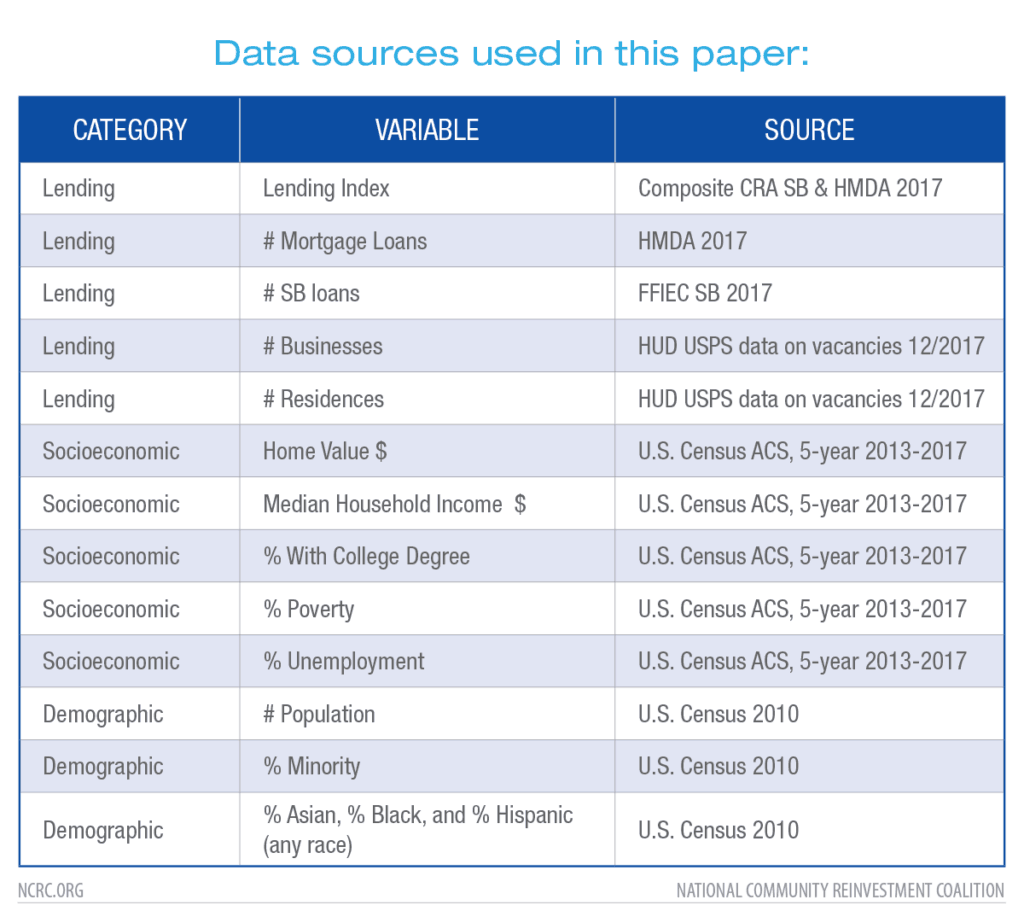 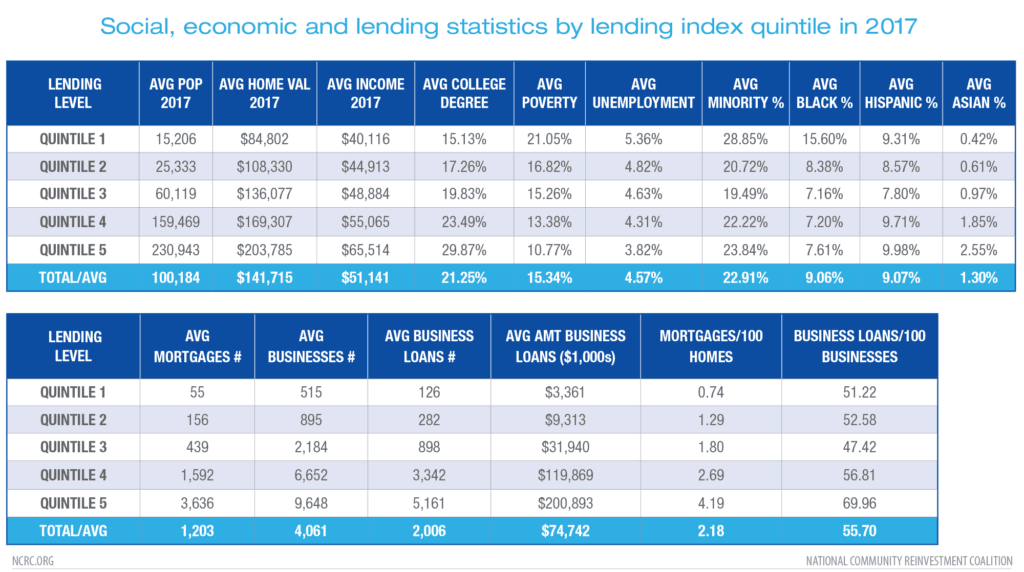 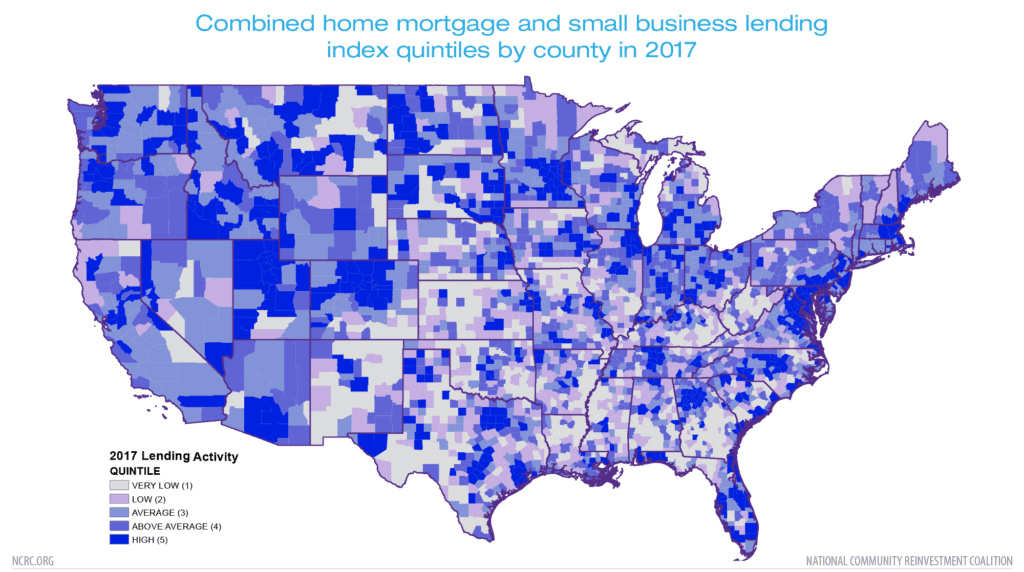 [4] Definition of community development in the CRA regulations, see the Definitions section, §25.12, https://www.ffiec.gov/cra/regulation.htm

Photo by Taylor Wilcox on Unsplash