In 2010, when the Dodd-Frank Wall Street Reform and Consumer Protection Act was passed, it included a little known passage called Section 1034. This section of the massive bill reads in part:

The [Consumer Financial Protection] Bureau shall  establish,  in  consultation  with  the  appropriate  Federal  regulatory  agencies,  reasonable  procedures  to  provide  a  timely  response to  consumers,  in  writing  where  appropriate,  to  complaints  against, or inquiries concerning, a covered person (generally a bank or lender).

By the end of 2011, this complaint process had taken the form of a website, which allows something that was almost impossible previously: a consumer could file a complaint with a federal regulator about a bank or lender and get a response. Much like other regulated industries, banking now had a recourse for consumers who felt their banks or lenders weren’t treating them fairly.

The response from the public was immediate. In 2012, there were 72,373 complaints registered against financial institutions via this process. In 2013, that number grew to 108,218. In 2018, more than 257,000 complaints were filed by consumers seeking the support of the CFPB.

Mick Mulvaney, the former interim head of the Consumer Financial Protection Bureau (CFPB), refers to the database as “Yelp for banks,” and has stated that he wants to dismantle the public access to this data. That isn’t just a misinterpretation of the intent of the law but would also be counterproductive for both banks and consumers. Kathy Kraninger, the current director of the CFPB, has not made public her feelings about the database since her confirmation in December 2018. 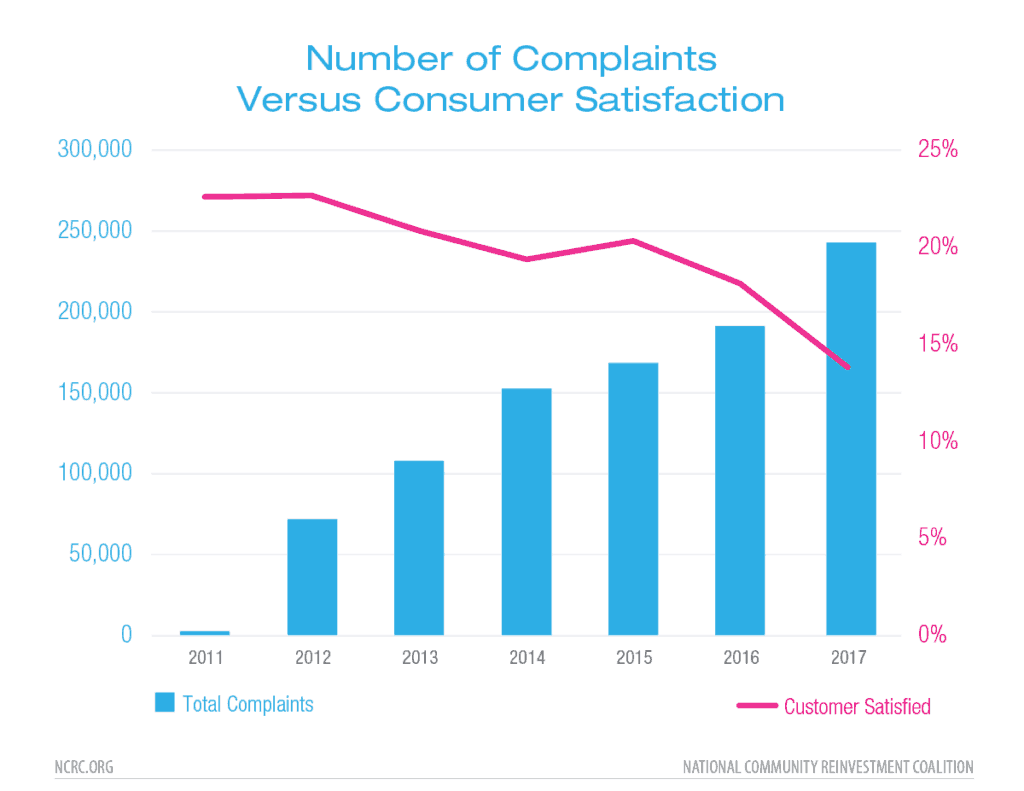 Consumers apparently feel that a “Yelp for banks” was just what they needed, and each year more and more consumers are confirming this by filing complaints about the financial companies they deal with. Meanwhile, the consumer satisfaction with those companies continues to decline.

More simply put: Although consumers are making more complaints, they are less happy with the response they are receiving.

But what does that really mean?

Once the answer is sent back to the consumer, they can then choose to accept or dispute the response. If they dispute it, an investigator with the CFPB reviews the file and attempts to resolve the issue with the consumer and their regulated entity. At the end of this process, the consumer is then asked to indicate if they were satisfied with the second resolution to the complaint.

Among the products which received the most complaints from 2012-2016, there is a wide variation in the level of customer satisfaction. 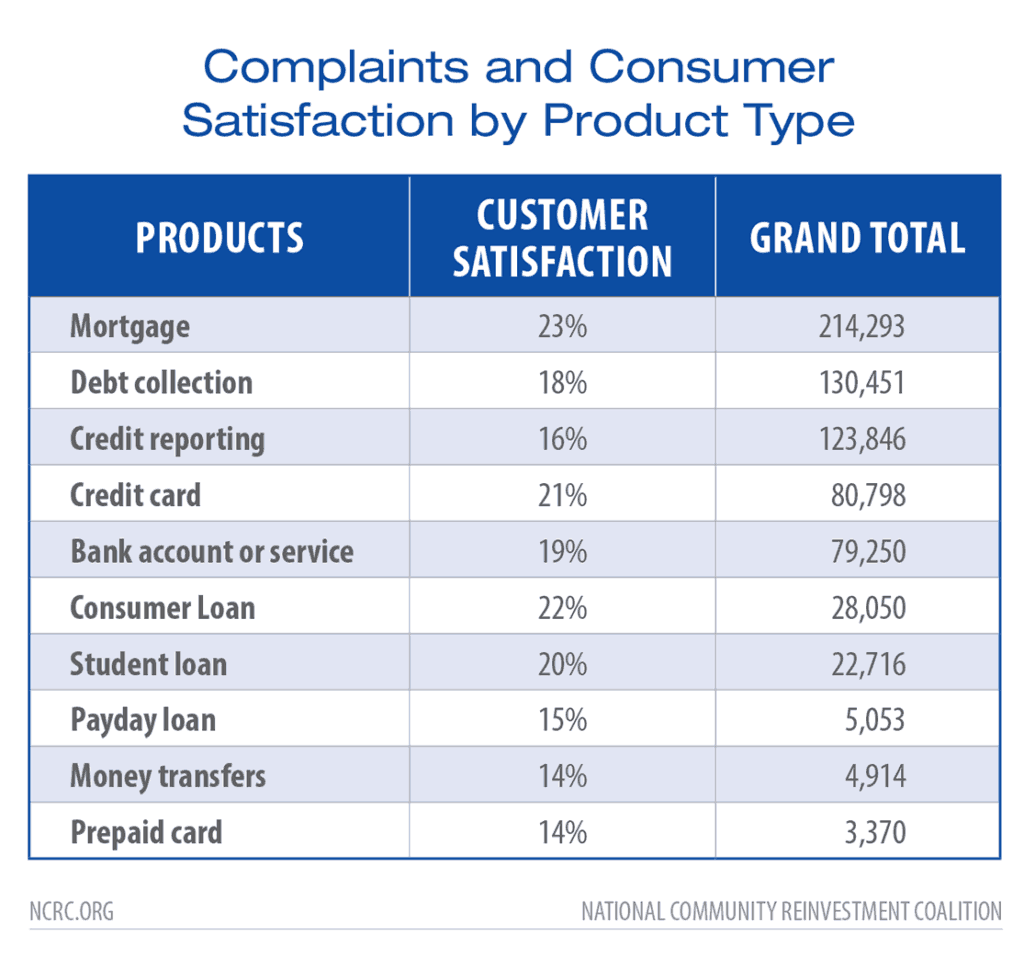 The lowest satisfaction levels appear in conjunction with complaints about credit reporting and payday lending. But none of them are very high. 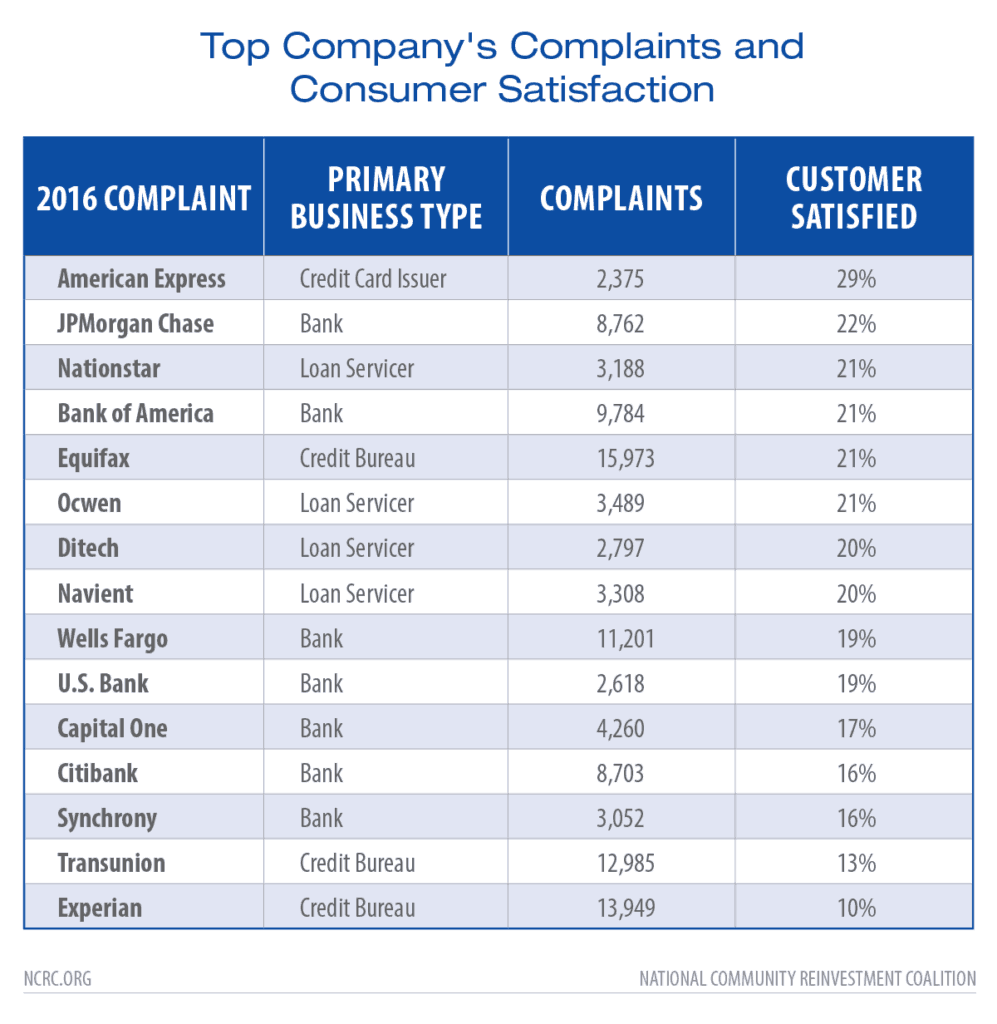 One interesting aspect of the database is that the consumers are able to provide a narrative to explain the reason for their registered complaint.

Although derided by CFPB critics for lacking context, the narratives overwhelmingly detail consumers that are struggling with financial issues that are larger than any bank. Frustration with automated systems and human staff are underpinned by broader economic distress. In many cases, consumers describe how a catastrophic event has led to turmoil that other factors simply exacerbate.

Take this typical narrative pulled from the database dated March 2015;

I took out a loan from Cash Central …for $300.00 sense [sic] that time I lost my job and also my medications went through the roof so I was unable to pay the loan back. …They have caused me to pay out so much money at my bank,…. They have caused me to pay out hundreds of dollars in overdraft fees, money that I could have paid them with but they would not stop trying to debit my account.

These narratives are the story of our economic recovery, where stock prices and housing costs continue to rise but people still struggle to keep up.

The consumer complaint database is an important source of information for advocates and the public. It is a brutal window into the experiences of people struggling to keep up with a financial system that is large, complex and often uncaring. Understanding how these complaints function and the reasons why consumers choose to file a complaint, provides a better understanding of what consumers are going through and how effectively our financial industry is addressing those issues.

If you are interested in learning more about how to use this data or to be informed about the complaints and consumer satisfaction among banks in your area, NCRC can help.

Photo by Tim Evans on Unsplash