A dozen years after a gas and chemical leak ravaged their community, the residents of Eight Mile, Alabama, are still waiting for the federal government to take action against the companies responsible for it.

More than three years after the National Community Reinvestment Coalition (NCRC) and the South Alabama Center for Fair Housing (SACFH) filed a housing discrimination complaint with the Deparment of Housing and Urban Development (HUD) for the treatment of Black residents in an area known as Eight Mile, just north of Mobile, Alabama, there is still no resolution.

COVID-19 is surging through this same area, where Mobile Gas’s 2008 gas and chemical leak caused environmental and health hazards that have yet to be dealt with and increased the residents’ risks to COVID-19 comorbidities like respiratory issues.

NCRC and SACFH’s complaint alleges that utility companies Spire, Mobile Gas’s current owner, and Sempra Energy, the company’s owner during the chemical leak, acted in a discriminatory manner that resulted in disparate treatment of Black residents in Eight Mile. The complaint details the companies’ failure to clean up the leak and address the medical and housing needs of impacted residents. The complaint, filed in October  2017, followed a year-long investigation by NCRC and  SACFH into the companies’ lackluster responses in the predominately-Black community.

Sempra Energy not only owned Mobile Gas in 2008 when the leak occurred, but also owned SoCalGas, which was responsible for a similar gas leak in Porter Ranch, California, an affluent neighborhood on the northern fringe of Los Angeles, in 2015.

Like Eight Mile residents, Porter Ranch residents were greatly impacted by the gas and chemical leak. Residents in both communities complained of chronic headaches, severe respiratory problems, eye irritation and sore throats. Despite sharing these same environmental and health hazards, the neighborhoods are different in terms of race and affluence. The Porter Ranch community in California was 63.4% white at the time of the chemical spill, while the Eight Mile community in Alabama continues to be 83.3% Black. Porter Ranch is an upper- to middle-class neighborhood, while Eight Mile is a low-to-moderate income Black community.

While the gas and chemical leaks at Eight Mile and Porter Ranch were not identical, the impacts on the health of the residents and the habitability of the communities mirrored one another. The singular difference that the gas companies hope to bury, and refuse to acknowledge, is the racial composition of the two communities and the underlying discriminatory bias at the heart of Spire and Sempra’s response to the Eight Mile leak.

The differences in the scale and timing of the responses in the two communities also highlight systemic inequalities. In Porter Ranch, federal, state and local authorities responded vigorously to the methane leak, which prompted Sempra to pay more than $50 million to immediately relocate residents who lived nearby. Furthermore, officials reached a $119.5 million settlement with SoCalGas in 2018. That settlement did not include the $4 million settlement that was reached by SoCalGas with state prosecutors.

By contrast, even though Mobile Gas acknowledged in a 2012 open letter to the public that “we found Mercaptan in the air,” it characterized the gas leaks as “minor” and did nothing other than remove some soil from around the immediate leak. Attorneys, capitalizing on a vulnerable population, filed lawsuits that settled for an estimated $10 million, with an undisclosed number of residents receiving as little as $1,000 for their suffering. A one-time payment to a few residents to placate the more than 4,500 Black residents suffering from headaches, nausea, rashes and asthma for the past decade, and now facing even greater risks to COVID-19, is a slap in the face to those impacted.

In April 2016,  the New York Times published an in-depth report on the Porter Ranch leak and its impact on people who lived there. It has never reported anything about the people of Eight Mile.

There continues to be little to no response from federal, state and local authorities to the Eight Mile leak. Three years later, the federal complaint with HUD is still undergoing reviews and processing. The Alabama Department of Environmental Management (ADEM) has taken limited soil samples and sporadically tested the air, but has not tested the water table in the area and has not initiated any enforcement action against the companies or worked with residents to address health and housing impacts.

The residents who experienced an estimated 6,000 pounds of mercaptan leaked into their water and air continue to suffer daily. Many of their homes are uninhabitable or impossible to sell because of the environmental hazards. Residents risk the possibility of never receiving justice for the companies’ blatant act of discrimination, and now they wait for justice through a pandemic.

Given the respiratory and other health impacts of the Eight Mile leak, which are added risk factors for illness and death from COVID-19, the fact that government officials and the companies responsible for the suffering in Eight Mile continue to ignore this environmental disaster is appalling.

According to data from PolicyMap, 25% of the population of nearby Mobile are at an elevated risk of death from COVID-19. Moreover, 35% of confirmed cases as of October 11 in the stateare Black although they are just 27% of the population. Residents suffering from a number of respiratory ailments are at a higher risk of experiencing life-threatening complications if they contract the coronavirus. This chemical leak further weakens the ability of the people that are impacted by it to survive COVID-19.

“Everyone involved passed the ball while this predominantly-Black community continued to suffer from side effects of Mercaptan exposure,” said Teresa Bettis, Executive Director of the SACFH. “Yet, residents of the White affluent Porter Ranch community received compensation and were relocated to neighborhoods filled with opportunities.” 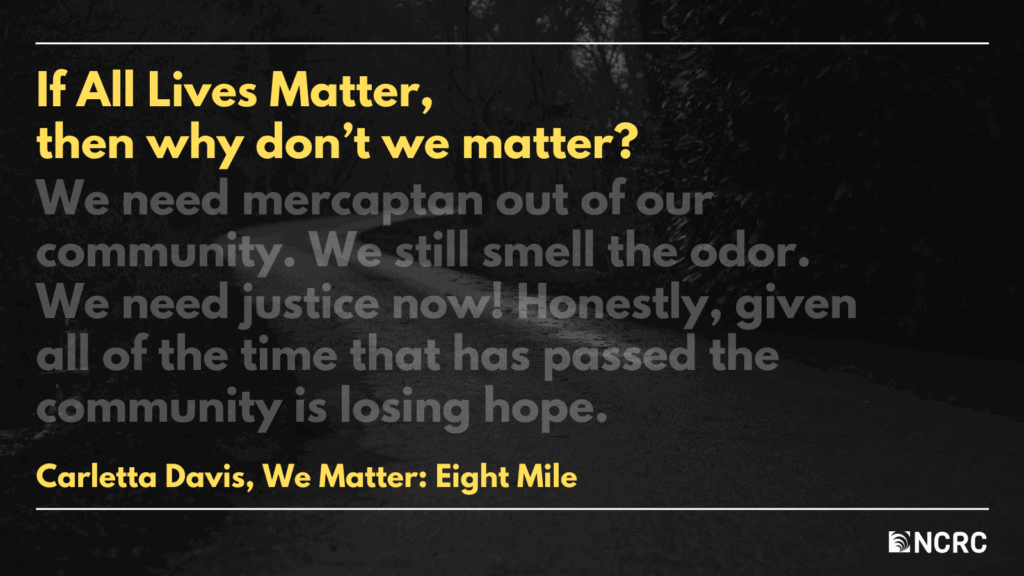 In a time of civil unrest, when the country grapples with the systemic racism within social institutions that are disproportionately killing and oppressing Black people, the Black residents of Eight Mile continue to fight for justice while their environment slowly kills them. The health of this Black community continues to deteriorate due to deliberate indifference in addressing this chemical leak. This is another tragic showcase of America’s truth – rampant systemic racism results in the killing and oppression of Black people. This must change. Black communities matter and cannot be ignored any longer.

“The citizens of Eight Mile and surrounding areas of the mercaptan leak have breathed unclean air that has caused us to have respiratory problems for over ten years,” said Carletta Davis, local resident and community leader who found the group We Matter: Eight Mile. “We now know that these chronic conditions put us at an even higher risk of COVID-19 and the effects on our bodies. We need mercaptan out of our community. We still smell the odor. We need justice now! Honestly, given all of the time that has passed the community is losing hope. If All Lives Matter, then why don’t we matter?

Hopefully the residents of Eight Mile won’t have to fight much longer until they receive justice. As HUD continues to investigate, NCRC and SACFH remain committed to supporting and fighting alongside these residents.