In the wake of the 1930s Great Depression, the federal government sought to strengthen homeownership through the 1933 establishment of the Home Owners’ Loan Act and accompanying creation of the Home Owners Loan Corporation (HOLC), resulting in more than $3 billion in mortgage financing. The history of HOLC’s discriminatory and disparate neighborhood desirability rating system is well documented.[5] Predominantly White neighborhoods were deemed “most desirable” and outlined in city maps with green. In contrast, “hazardous” neighborhoods populated with “undesirable” ethnic groups and run-down infrastructure — predominantly Black communities — were outlined on city maps with red. HOLC’s discriminatory practices were enabled by the Federal Housing Administration, which ensured and supported lending and subsidized housing development in greenlined, predominantly-White communities. These housing policies, coupled with the socio-economic impacts of slavery and Jim Crow laws, contributed to a vastly unequal homeownership landscape. In 1940, the Black homeownership rate (22.8%) was nearly half of the White homeownership rate (45.6%).[6]

Homeownership over the last 40 years 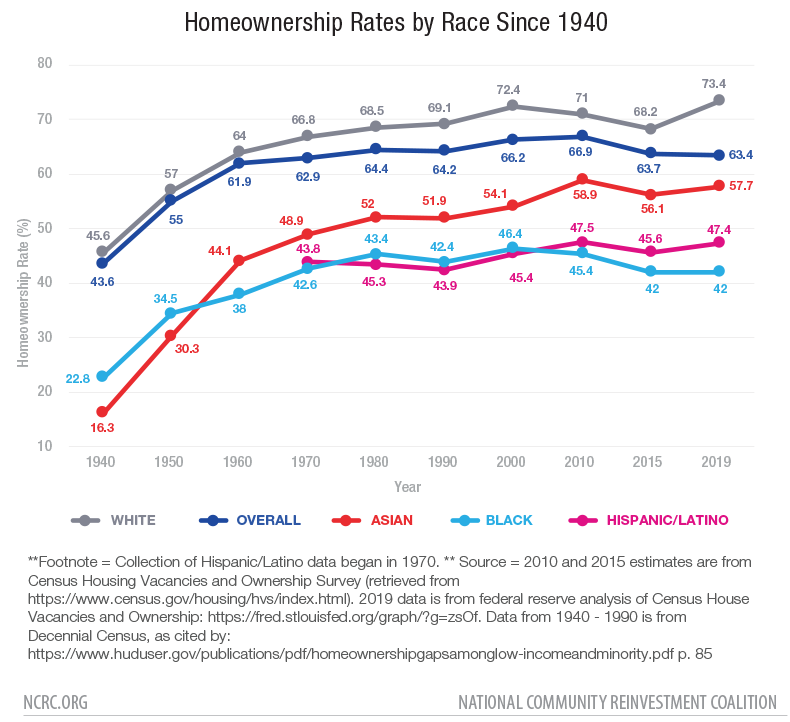 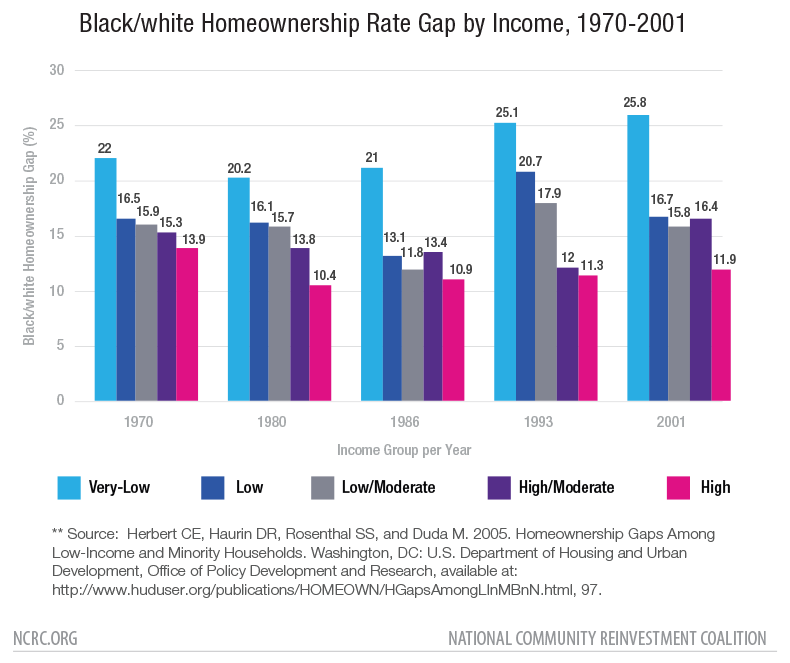 The United States must make strides to reverse the decline of Black homeownership that has been the trend for most of the last 20 years, and ensure home loss protections for its most vulnerable populations during and post COVID-19 economic disruption. Doing so not only ensures the economic stability of families but continues to also carve a path of wealth protection for low-wealth families. Since the turn of the century, homeownership rates for Black Americans have steadied and slowed more significantly than other racial group. Therefore, a focus on advancing Black homeownership is paramount to achieving a more equitable economy. A focus on African American households over the age of 40 with credit scores between 600 and 700 and a median annual household income of $40,000 to $100,000 is a group that is vital to strengthening Black homeownership rates. This age demographic is important to focus on, as younger Black homeowners have a higher likelihood of transitioning back to renting: 59% of Black homeowners younger than age 35 did so. This household income group is also important to focus on, as building wealth for LMI families via homeownership could significantly improve their economic standings overall. Homeownership efforts should also focus on southern and midwestern states with a largely middle-income African American population. These areas — such as Minnesota, Georgia and Michigan — have a large potential to increase Black homeownership rates nationwide.

Where across the United States will these additional new Black homeowners come from?

For example, Georgia is a state that fits this model, with a median Black household income of $44,600 and a Black renter rate of 53%.[14] Even in cities where the Black population is large — such as Atlanta, Baltimore and Washington, D.C. — Black home mortgage borrowers are still underrepresented in the mortgage market in comparison to White applicants, even when controlling for income. For example, although Baltimore has a 29% Black population, only 15% of mortgages have originated with Black borrowers since the Great Recession. In comparison, 60% of total mortgages have gone to White borrowers — a 45% gap.[15] Minneapolis has the largest gap between Black and White homeownership at 50%, with Albany, New York, following with a 48.8% gap in homeownership and Buffalo, NY with a 44.5% homeownership gap.[16] This indicates a sizable Black population who could afford to become future homebuyers, and just need some assistance and affordable housing.

Low-wealth Black homebuyers have a different set of needs that are often unaddressed by mainstream mortgages and homebuying programs, such as lower savings available for a down payment and lower credit scores. Also, 33% of Black households have thin credit files, meaning that their credit-use levels are insufficient for generating a credit score.[17] In comparison, only 18% of White households have a thin file. This further contributes to the Black-White homeownership gap as households with poor credit or thin credit files struggle to obtain mortgages.

Financial stability and mortgage products that accommodate income and wealth levels are not only advantageous for purchasing a home, but also in keeping and maintaining a home. Low-income Black households don’t often have the financial means for housing maintenance and improvement, falling victim to ill quality and substandard housing over time. Nationally, 35.8% of occupied housing units need at least one repair. Among these households, low-income, older homeowners had the highest average repair costs across all groups ($4,187) and households in these groups were disproportionately likely to identify as Black.[18] Depreciating homes generate little value and equity when it’s needed the most and additional programs can be established to mitigate such risk.

A Call to Action

Widespread reform is needed to change the state of Black homeownership and with it the racial wealth divide that keeps African Americans in a cycle of asset poverty. A bold federal program, such as the proposed 21st Century Homestead Act, that focuses on revitalizing large clusters of abandoned properties in cities with hyper-vacancies, paired with federal jobs programs that combine infusing greater income and homeownership opportunities targeted at African Americans, is the type of plan that needs to be explored to bridge these historic inequalities.[19] Housing reforms must encourage marshalling federal resources to boldly address the devaluation of Black neighborhoods and enable communities to develop new and preserve existing affordable housing stock.

In addition to meeting the fundamental needs of housing access for Black Americans, there must be a renewed focus on wealth creation and an overall narrowing of the racial wealth divide between Blacks and their White counterparts. Much like trends in homeownership, little has changed in the wealth of low-income households as the wealth gap between low- and middle-income households continues to grow, with pronounced differences across racial lines.[20] Proposals need to address the wealth divide directly, such as baby bonds and some form of reparations for descendants of African slavery. Originally conceptualized by Darrick Hamilton and William Darity Jr., baby bonds would be federally managed and endowed savings accounts set up for all children at birth. Baby bonds would be endowed in a race- and income-conscious progressive scale, with lower-income families receiving larger deposits. Funds would be accessible upon the child turning 18, and could be used for postsecondary education, homeownership or retirement.[21] Funding for a baby bonds program would come from robust tax reform. This would ensure that the wealthiest in America play an integral role in wealth redistribution to the most economically disenfranchised.

The idea of reparations is not new. The Civil Liberties Act of 1988 provided more than 80,000 survivors of Japanese internment camps with $20,000 checks as a formal apology for imprisoning Japanese Americans. Similarly, Germany paid about $40 billion to Jewish victims of the holocaust and their descendants.[22] African Americans, many of whom can trace their heritage back to enslaved ancestors, are also due for financial restitution. The legacy of slavery, Jim Crow and institutional discrimination has resulted in severe economic disenfranchisement of African Americans, particularly when compared to other racial groups. A national reparations program could substantially improve the economic standings of African Americans, both immediately and intergenerationally. Many cities have already taken steps toward a housing-related reparations program and intervention, advocating for the redirection of industry revenue to support housing programs, for example.

Of all the assets that lead to wealth, homeownership is often the first step (and, in some cases, more obtainable asset) for many Americans. It can also be a launching pad to true asset diversity and wealth. If having a diverse and balanced portfolio of assets ensures wealth and economic stability for White households, then strengthening the pathway to homeownership is only one of many ways to achieve true, meaningful wealth for Black households. It is therefore imperative that homeownership is not only increased among African Americans but home values – and the ability to leverage this value – is also on par with White households’ return and increase on wealth.

[1] Authors use the terms “Black” and “African American” interchangeably throughout the paper.

[3]  FSC Majority Staff (2019, May 8). A Review of the State of and Barriers to Minority Homeownership. [ Memorandum] p. 3. United States House of Representatives Committee on Financial Services. Retrieved from https://financialservices.house.gov/uploadedfiles/hhrg-116-ba04-20190508-sd002_-_memo.pdf

[5]NCRC (March 20, 2018). “HOLC ‘Redlining’ Maps: The Persistent Structure of Segregation and Economic Inequality”. Retrieved from https://ncrc.org/holc/ For more information, see The Color of Law: A Forgotten History of How Our Government Segregated America by Richard Rothstein (2017).

[18] Divringi E., Wallace E., Wardrip K., Nash, E. (2019). “The Cost to Repair America’s Housing Stock — and Which Homes Need It The Most”. Federal Reserve Bank of Philadelphia and PolicyMap. Retrieved from https://housingmatters.urban.org/research-summary/cost-repair-americas-housing-stock-and-which-homes-need-it-most

[19]Baradaran, M. (May 2019). “A Homestead Act for the 21st Century”. The Great Democracy Initiative. Retrieved from https://greatdemocracyinitiative.org/wp-content/uploads/2019/05/Homestead-Act-050719.pdf

two para below has changed.

Are Loan Modifications For Small Businesses a Possibility in the COVID-19 Pandemic?