Since the death of George Floyd on May 25, nationwide demonstrations protesting police brutality and systemic racism have reignited conversations around racial inequality. There has been much discourse and deliberation around solutions on how to bridge the nation’s racial economic divide. Communities and organizations at large are calling for police budgets to be defunded and a redirection of funds into disadvantaged communities. Others are calling for direct reparations. A recent paper, co-authored by Dedrick Asante-Muhammad for Institute for Policy Studies, outlines national policies that can significantly advance the country in racial economic equality. These calls for stronger representation and community investment are certainly not new demands, but appear to have new resonance in our national politics and dialogue about the future of the country.

Racial equity cannot happen without economic equity. Corporations across the country are pledging action and millions of dollars of investment into “racial justice” causes, yet there has been very little movement in one of the easiest areas to make advancement: racial and ethnic representation and procurement by corporations. For example, in 2019, the NAACP released an Opportunity and Diversity Report Card on the Hotel and Lodging Industry, which found in 2007, Equal Employment and Opportunity Commission (EEOC) reported that 71% of top management positions in the Hotel and Lodging industry were held by Whites. By 2015, the White share of top management positions had actually grown to 81%.

NCRC’s Race, Wealth and Community team, in partnership with Beneficial State Foundation, are analyzing racial and ethnic representation and procurement in the financial sector. We find that both Blacks and Latinos respectively comprise 7% of mid-level management positions. These levels of representation are significantly lagging behind these racial groups’ national representation, as Blacks make up 13% of the national population, and Latinos are 18% of the population.

This underrepresentation is exasperated at the highest, and most powerful, positions of banks, as we find that only 3% of executive/senior level positions are occupied by African Americans, and only 4% of these positions are occupied by Latinos. Corporate America, in large part has failed to represent the racial and ethnic diversity in its higher level positions and procurement. It is past time that all corporations that share their procurement spending, and EEOC data, with the public. Corporations also need to publicly share their racial and ethnic representation and procurement strategies with clear, targeted goals in the short term, to illustrate how they are going further than simple and ambiguous monetary investments.

Racial and ethnic representation and procurement of course is not the end all of what corporations can do to advance racial and ethnic economic equity. We are developing a “Circle of Corporate Commitment to Advancing Racial Economic Equality” which also includes: products and services; philanthropy efforts; corporate governance and social mission; and advocacy and policy. In all of these areas, corporations can help the country make important steps to bridging racial economic inequality. Now is the moment where corporations can help lead in the movement for greater racial equity instead of being a lagging indicator of ongoing racial economic inequality. 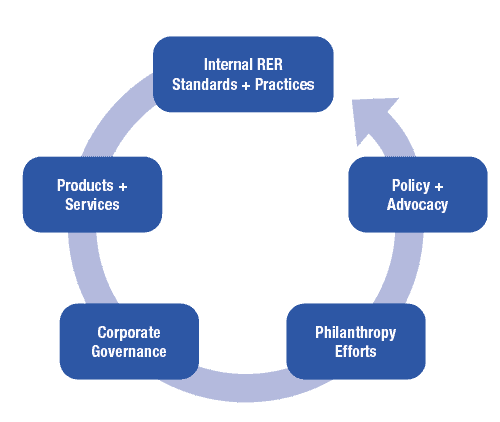 Dedrick Astante-Muhammad is NCRC’s Chief of Race, Wealth and Community.

Jamie Buell is an intern with NCRC’s Race, Wealth and Community.

Photo by Adeolu Eletu on Unsplash