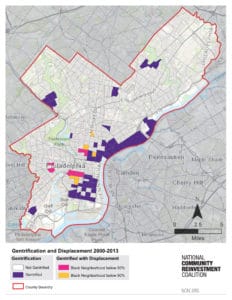 Philadelphia has been one of the most rapidly gentrifying metro areas in the nation. A recent study by NCRC found that between 2000 and 2013, 57 neighborhoods in Philadelphia showed signs of residential gentrification. This includes the influx of large numbers of college-educated residents, booming property values, and rising incomes. Mapping these neighborhoods shows the concentration of gentrification in and around Dickinson Narrows, Wharton, and the Northern Liberties areas of the city. All of these areas, particularly City Center, have also seen rapid increases in population over the past decade.