COVID-19 has caused a worldwide disruption of employment resulting in more people than ever filing for unemployment insurance in the United States. Local businesses are devastated and state agencies overwhelmed as people stay at home to preserve their health and apply for government assistance to maintain financial solvency.

An unexpected side effect of this was a simultaneous increase in consumer complaints filed with the Consumer Finance Protection Bureau (CFPB). In 2019, NCRC published a report on the status of the consumer complaint database and the complaints filed between its 2011 inception and 2017. This groundbreaking database lets researchers explore the data collected by the CFPB as they take complaints from the public about a wide variety of consumer products. Though it has been derided by the Trump Administration’s political appointees as “Yelp for banks,” this data is crucial to better understand the stresses and issues facing consumers in the financial marketplace.

In this update to that analysis, we reviewed complaints from January 2018 through May 2020. In particular, we reviewed the changes in complaint trends that appear to coincide with the impact of the COVID-19 virus.

The CFPB Consumer Complaint Database offers a tool to both analyze or export complaint data. Complaints can take up to 15 days from the day that they are filed to appear in the dataset, and narratives can take up to 60 days to appear. Data was downloaded in CSV format and analyzed using Tableau. Our analysis included complaints submitted since January 1, 2018, well before the advent of the COVID-19 crisis and ends May 9, 2020. This process yielded 661,601 complaints for analysis.

When a consumer contacts the CFPB either by phone or through the complaint website, a record is created. After this, several things happen automatically. The company is notified that there has been a complaint and is given 15 days to respond before the complaint is added to the public database. The consumer is also asked if they would like to provide a written narrative of the complaint and if they would allow that to be made public. If they consent to publication, the identifying information (phone numbers, social security information, bank account numbers, etc) is redacted and the narrative is posted to the database.

Total complaints received by the CFPB over the last 12 months

This includes all complaints compared to the average denoted by the red dotted line.

As the interactive chart above shows, from January 2018 through February 2020, complaints remained stable, with about 22,000 complaints filed per month. This is virtually the same as the 2017 monthly average. With the onset of COVID-19, a dramatic increase in complaints was observed, with 29,494 complaints lodged in March 2020 and an all time high of 35,062 complaints filed in April. This research brief covers data collected through the first full week of May 2020. During that single week, 8,658 complaints were reported, which following that trend would result in another 35,000 complaints in May.

On March 15, Puerto Rico became the first U.S. territory or state to officially issue a stay-at-home order for residents, a step that California and many other states quickly followed. Complaints quickly increased following this date as well.

Complaints filed in 2020 by product type

Complaints related to credit reporting and consumer reports have skyrocketed since the passing of the CARES Act.

Exploring the  data by the type of product the complaint is related to, we found that almost the entire increase in complaints in recent weeks was due to complaints about consumer credit reports. 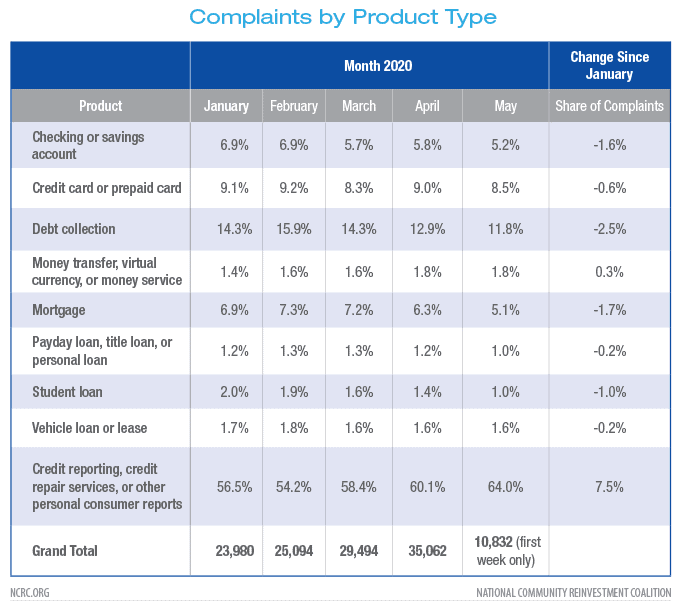 During the week of March 15, the number of people filing for unemployment insurance skyrocketed, going from 251,416 the week before to over 3.3 million, according to the Department of Labor. At the same time, there was a sharp increase in the number of consumer complaints filed with the CFPB.

The rising unemployment and passage of the CARES Act may have resulted in more complaints as consumers and financial companies struggled to adapt to the new requirements.

Unemployment claims rose very quickly, peaking at 6.9 million claims during the week of March 22. On March 27, Congress passed the CARES Act, which included substantial support for those seeking unemployment as well as payments to consumers, forbearance for mortgage borrowers and support for small businesses. In the weeks that followed, there was a rapid increase in complaints to the CFPB as well, peaking almost a month after unemployment claims started to decline.

In May 2020, the CFPB released an analysis of 4,541 complaints using non-public narrative data from 2020 where consumers mentioned the words COVID, coronavirus, pandemic or CARES Act.

Their findings were that a variety of issues predominated the complaints that these consumers filed against their financial company including;

The narratives that are included with the CFPB Complaints are a limited but instructive window into the cause of the complaint. Narratives can take up to 60 days to appear in the dataset if the consumer both volunteers a narrative and consents for it to be released. In 2020, the publicly released complaints filed with the CFPB included 32,323 with narratives, or an average of 2,309 each month. This is approximately 10% of the total number of complaints reported and these narratives offer an explicit and at times excruciating window into the hardships consumers endure. 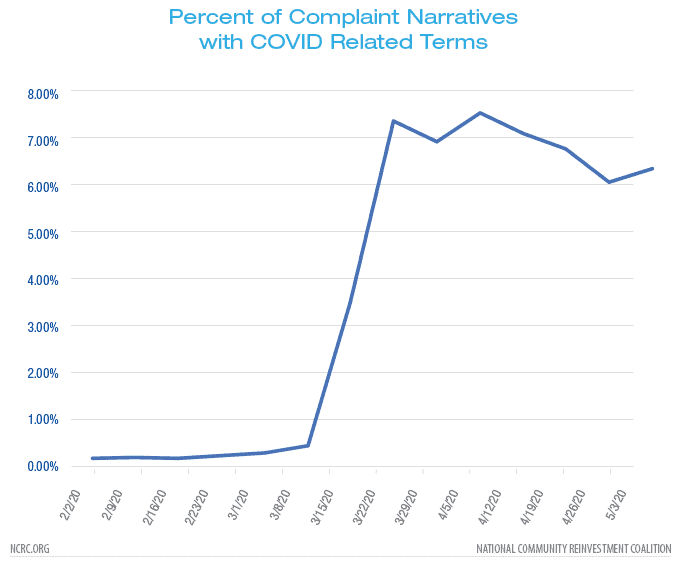 Our analysis of the 2020 complaints available to the public revealed 1,004 complaints which mentioned a keyword that suggested the consumer was experiencing a hardship due to the COVID-19 virus. The terms included in this search were COVID, COVID-19, virus, coronavirus, pandemic, shutdown, furlough and CARES Act. These are broader than the terms used by the CFPB but returned a smaller number of results. This is likely due to the difference between the public and non-public complaint datasets. The week that Congress passed the CARES Act over 7% of complaints filed with narratives available to the public included a mention of COVID-19 virus as a factor in the complaint.

A sample of 10 of those complaints was reviewed to offer a rough idea of what was driving this surge.

Some of the narratives shed more light on how consumers are feeling the stress of COVID-19 and are confused about the options available to them. These conditions appeared to be exacerbating already tough economic conditions. Below are three examples that were typical based on the narratives we reviewed for this research brief.

“…we are in the middle of a worldwide pandemic and Capital One has FAILED for WEEKS To answer the phone.”

Frequently, consumers were complaining about the forbearance terms offered by mortgage servicers.

“ Because of the Cononavirus I’m out of work and wanted to see what I could do payment wise with the company because it’s an international problem. Basically, they said I could go in a three month forbearance. At the end of the three months I would have to come up with the three months of mortgage in full up front. This is basically impossible if I’m not working.”

The impact of these errors was compounded by the loss of income due to COVID-19.

“I reached out to my Mortgage Company ( Loan Care LLC ) for assistance due to income loss related to COVID-19. Loan Care Informed me that I was approved; nevertheless, I never received documentation to show my approved amount of terms. I was forced to choose between feeding my family or run the risk of loosing my home due to Loan Cares incompetence and unreliability.”

The CFPB Consumer Complaint database is a valuable resource for understanding the stress that consumers are experiencing in the financial marketplace. It offers a clear indication of the types of problems people have been facing with their servicers and lenders as COVID-19 devastates our economy. Some of these issues were due to confusion about the benefits offered under the CARES Act, while others were due to loss of work, declines in income or other COVID-19 related impacts. The increase in credit reporting complaints suggests that consumers are monitoring their credit closely, and possibly are seeking out new credit in anticipation of expenses related to the pandemic.

This analysis suggests that future research on complaints can provide both a barometer of the financial pressure being experienced by the public and greater insight for enforcement of existing laws. In particular, textual analysis of consumer complaints en masse might offer greater insight on specific circumstances that financial firms could address to provide targeted relief to consumers. Further research should focus on metrics that could be used by regulators and the public to identify bad actors and products that are more likely to result in a consumer complaint.

In the face of the greatest period of social, economic and political challenges the United States has faced in at least a generation, data such as that collected by the CFPB is a critical of the pain consumers are feeling. More research into the complaints, their root causes and resolutions is warranted.