Banks help other lenders get around state laws to facilitate abusive puppy mills and trap pet owners in predatory loans. Federal regulators can put a stop to it.

It’s hard for anyone to resist the charms of a puppy. But with prices of certain breeds spiking into the thousands of dollars, pet shoppers can get some serious sticker shock. Buying a puppy is an emotional transaction – and pet stores have gotten clever about how to leverage those intense feelings to sell even the most expensive dogs. Several of them now offer financing plans at the register: Just sign here and she’s all yours.

But your kid won’t know you just stumbled into a debt trap. All they know is that you brought home a puppy!

Our Request to You:

Sign this petition. Demand that the FDIC close this loophole.

Such loans are supposed to be illegal in most of the country. Many states have clear usury laws that cap consumer lending interest rates far below the charges that predatory credit companies rely upon in their business model. But these state interest rate caps are routinely bypassed through partnerships with banks that have federal banking charters – and federal regulators have the power to do something about it.

The predatory puppy payment plans scheme relies on something known as the “rent-a-bank” loophole. Here’s how it works: 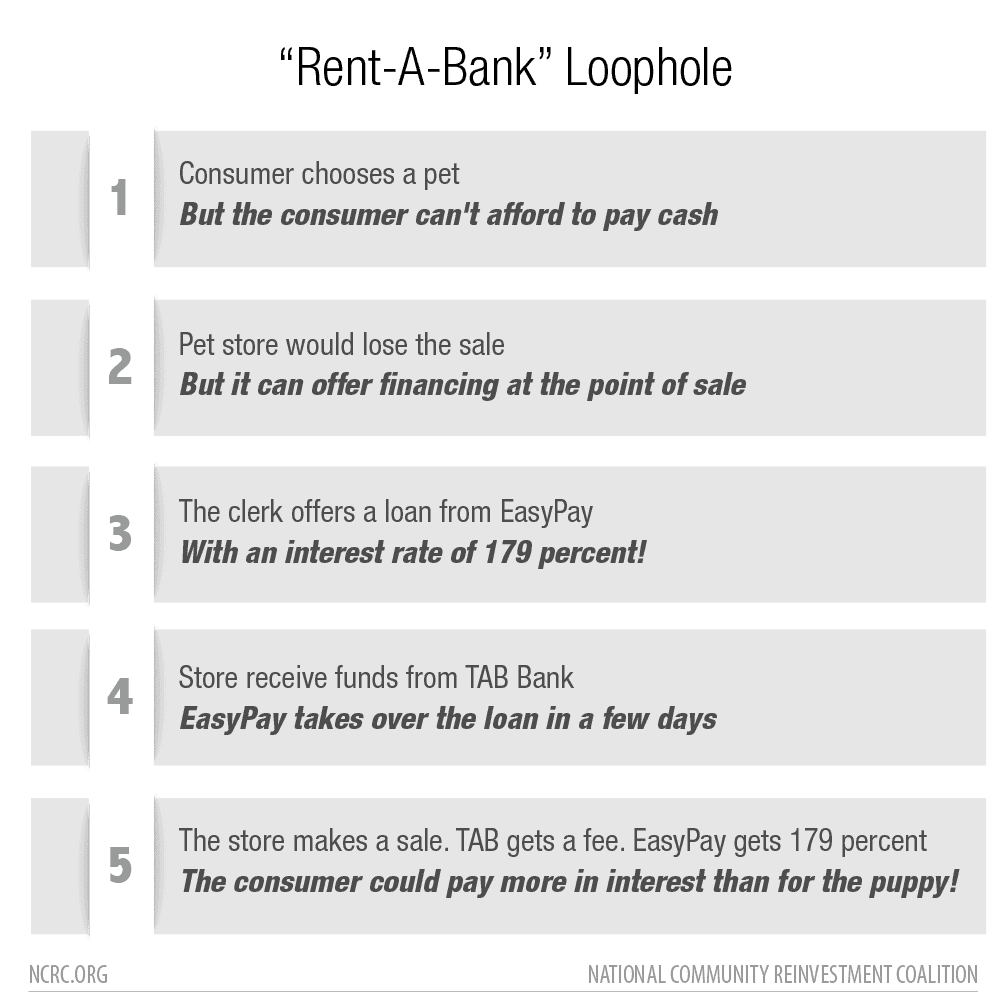 There is a sad story behind these arrangements. Many pet stores partner with “puppy mill” breeders, according to the Humane Society, and subject their animals to unhealthy and abusive living conditions. The “rent-a-bank” scheme that EasyPay Finance and its pet store partners use props up those abuses.

But it does not have to be this way. The FDIC has the power to put an end to the high-cost financing of puppies, as well as other partnerships that also circumvent state interest rate caps, by simply changing its rules. The FDIC needs to know that the American public won’t stand for this any longer.

NCRC has joined with Americans for Financial Reform, the National Consumer Law Center, the Center for Responsible Lending, the Consumer Federation of America, the Humane Society of the United States,and numerous other advocacy groups in a campaign to Stop the Debt Trap. Join us in urging the FDIC to change its rules and close the rent-a-bank loophole.

Click here to add your name to a petition to let the FDIC know it’s time to protect puppies from predatory rent-a-banks!

Photo by Judi Neumeyer on Unsplash